How we have supported the hospital

The first purchase in November 1958 was six geriatric chairs, 14 pillow phones and re-upholstery of two armchairs. In 1959 a revolving summerhouse was bought. The first major project was the funding of a new day-room at a cost of over £1,500 in 1960. It was dedicated by the Bishop of Tonbridge. Also in the same year the first ‘wireless set’ and television were provided. By 1962 a VHF wireless system covered the whole Hospital. In 1961 the LOFs started the Hospital trolley.

In 1964 money was given for a Doctor’s Room and Library, which was dedicated by the Bishop of Tonbridge in 1965. By 1965, the tradition of gifts for the patients at Christmas was happening. In 1966 a canopy was provided over the Hospital entrance. In 1967 a sitting room was provided for the private patient’s ward of the Hospital at a cost of about £1,000. In 1968 an Electrocardiogram was bought for the doctors at a cost of £294. In 1970 £1,500 was given to extend the X-Ray department and provide a new toilet by the day-room. A television set was bought in 1969 for the nurses and in 1970 for the patient’s day room.

In 1971 £462 was spent on purchasing bedside tables for the patients. In 1972 help was given to improve the facilities of the Operating Theatre and the provision of a recovery unit at a cost of £1029. In 1973 new radio equipment was provided throughout the Hospital. In 1974 £1,500 was raised to modernise the four bathrooms in the Hospital. A major purchase in 1975 was a Portable Autoclave for the Operating Theatre and, at a cost of £1,380, 10 ‘Variable Height’ Beds were bought. In 1977 £1,000 was spent on resuscitation equipment. In 1978 a Day Centre was built with money coming from a Trust Fund in memory of the late Sir Henry d’Avigdor Goldsmid and Tonbridge Lions Club. The League of Friends paid for the furnishings and moveable equipment which cost over £4,600. The Day Centre happened as a result of the determination and enthusiasm of Mr Maurice Gilham of the Tonbridge Lions Club and Dr Stuart Forsyth. In 1979 colour television sets were purchased for both of the wards at a cost of £1,197 with the Tonbridge Lions Club also contributing £750. In 1980, £2,000 was spent in replacing all the windows in the two wards. In 1981 £2,800 was spent on a new X-Ray Processor and £386 on an Ultrasonic Therapy Unit while in 1982, £7,500 was provided for kitchen equipment during the major renovation and modernisation of the kitchen area. In 1983 new tracking for curtains and re-curtaining was provided at a cost of £2,840. In 1984 the LOF purchased a second hand ambulance for transport to the Day Centre for £1,500. The LOF spent £5,026 in 1985 on a joint project with Tunbridge Wells Health Authority to provide a new sluice area.

In 1986 the LOF paid the full cost of £15,235 for the new car park which was named after the late Sir Henry d’Avigdor Goldsmid, and was a commemoration of the 50th anniversary of the Hospital on the site. In 1987 an ambulance was bought for £16,500 to transport patients to the Day Centre with volunteers doing the driving. Minor items were bought in 1988-1989 though in total £3,724 was spent in gifts to the Hospital. 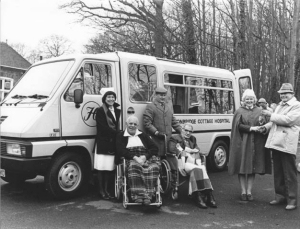 In 1990 over £10,000 was spent equipping the new physiotherapy department and £5,567 was used to purchase two Pegasus Airwave Beds in 1991, with another one purchased in 1992. In that year all the single and double rooms were re-carpeted. In 1993 £2,490 was used to buy an ultrasound for the physiotherapy department and £1,417 for garden equipment. The next year a new vending machine was paid for as well as two televisions for the two wards and furnishings for the new conservatory. In 1996 the day room was refurbished and heating provided for the conservatory. In 1997 the conservatory had blinds fitted for £3,600. In 1998 further work was done to refurbish the Day Hospital with help from Tonbridge and Malling Borough Council and 12 Wheelchairs were purchased for £3,028.

In 1999 the Bluebell Campaign started to raise £50,000 towards the furniture and equipment of new wing of the Hospital including 15 beds which was completed in 2000. In total £51,603 was raised in the Appeal. Despite the large sum money raised for the Goldsmid wing, money was also found to buy an electric wheelchair.

There was again considerable expenditure in the financial year 2001/2002 with the purchase of a new mini bus for the Day Hospital costing £25,544 and £10,298 for the podiatry department. In 2003 the Rapid Response team was helped with a device called Speechmaster to help deaf patients. Over the next few years many minor items were purchased including curtains, kitchen equipment, ceiling hoist, hoist slings, two infusion pumps, syringe drivers and defibrillator, and a bladder scanner costing £5,475. In 2009 £3,135 was spent on acquiring Electronic Beds. In 2011 the LOF spent £9,391 on providing a paved walkway on the front lawn and restoring the rose garden which was dedicated as Godfrey’s Garden after In Memory of Godfrey Horne who was our Chairman and sadly died suddenly in 2010. Also in 2011 new digital televisions combined with radios were provided for the 26 beds at a cost of £24,792. In 2017, the LOF contributed, amongst other things to refurnishing the two Day-Rooms and two Staff Rooms and the two Summerhouses. The League of Friends purchases newspapers and flowers for the patients and refreshments for the staff.

Contributions to the life of the hospital also come by way of volunteering and being members of the League of Friends Committee and the TCHLOF Friends Group who all give valuable time to ensure that the best interests of the community are served. Other volunteers give time in the hospital undertaking regular tasks. Pauline Warren and Andrew Wheeler ensure that the shop trolley is well stocked and with other volunteers take the trolley around the wards for patients to purchase small items. Pauline is also responsible for planting the window boxes and baskets and keeping them watered in addition to purchasing gifts at Christmas and Easter.